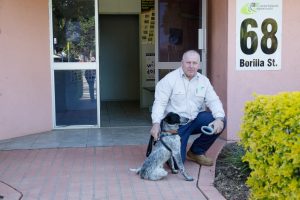 Coordinator Ranger Services Brett Keys said rangers will be targeting unregistered, non-microchipped and roaming animals throughout the region over the next few months.

‘The final due date for registration renewals was the end of August and so far we have received around 2000 dog registrations for the year,’ Mr Keys said.

‘During an animal inspection program in 2015 we identified more than 6000 dogs in the region, giving us.

‘We therefore have reason to believe that many dogs remain unregistered.

‘If an unregistered and non-microchipped dog is picked up by rangers, owners could face a fine of $266.

‘Meanwhile registering a desexed and microchipped dog costs just $20 per year. Registration gives. This registration gives owners the certainty that, should their dog ever escape or get lost, it can be identified and returned by ranger services and vets in and out of the region.’

Mr Keys said there were two parts to formally recognising dogs and cats in the Central Highlands.

‘All cats and dogs born after 1 July 2009 are required by law to be microchipped, so if they are found lost or wandering, they can easily be returned to their owner,’ he said.

‘All dogs must also be registered with council before they are 12 weeks old or within 14 days of moving to the region or taking over ownership.

‘Working dogs are an exception and we recommend people to fill out a working dog declaration form.

‘Hunting dogs are not classified as working dogs and need to be registered as domestic pets.’

Council continues to work with Animal Welfare League Queensland’s National Desexing Network (NDN) offering discounted desexing with the option to have the animal microchipped at the same time.  The discounted service is offered on a needs basis and people should phone the NDN on 07 5509 9044 to find out about eligibility.

Click here for more information on owning a pet in the Central Highlands.