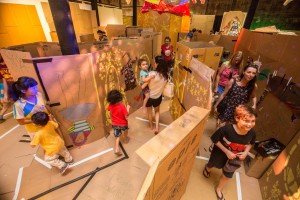 When Ruby Boussard was a child she dreamt of building a colourful cardboard maze full of twists, turns and adventure.

Fast forward to now and that dream isn’t just a reality, it’s part of her job!

Ruby is a visual artist based in Cairns who uses recycled materials to produce a wide range of environmental art. Next week, she will travel to the Central Highlands as part of council’s annual Arts in August program.

‘Building a cardboard maze was a childhood dream of mine,’ Ruby said.

‘Combine this with my passion for making art with the excess of packaging materials that are freely available and the result is Amaze.’

Amaze is a community project, led by Ruby, where children learn about wastage through craft workshops.

‘The Amaze is coloured by local kids, adding themselves and their ideas about their built environment to a cardboard labyrinth that has been constructed from large boxes,’ Ruby said.

‘Children and their parents are encouraged to be creative and imaginative with unusual materials and traditional craft techniques. All visitors can leave their mark on the Amaze and work through an interactive booklet. The aim is to build a world by the children, for the children.’

‘The venues in Emerald and Blackwater are especially exciting because the Amaze will be built outside,’ she said.

‘This will be cardboard box Amaze number 5 and 6.’

The project will take place in the park behind Emerald Library and at the Blackwater International Coal Centre.

For more information or to find out how you can become involved contact Kirsty Appleton or Karen Newman at council on 1300 242 686.

To check out what else is happening as part of Arts in August click here.