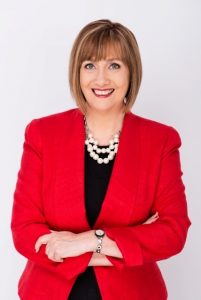 As the longest standing weather reporter in the country, Jenny Woodward can really say the sky is the limit, whether it’s filled with clouds, rain, storms, lightning, thunder or cyclones.

As the ABC weather presenter, Jenny is a nightly fixture on the 7pm News in Queensland and frequently appears nationally on ABC News 24. Jenny also contributes stories to news bulletins and the ABC online news website. She has just celebrated 30 years with the national broadcaster.

Jenny’s job has taken her around the state and she has not been afraid to appear with animals or children, and indeed her annual visit to the Ekka has become a hugely popular segment with viewers.

Jenny does regular spots on ABC Radio, has contributed to several books and is an enthusiastic tweeter… Jenny hosts many concerts, events and functions. She is a Queensland Media Award winner and is honoured to be an Australia Day Ambassador at our Emerald celebration. See full event details here