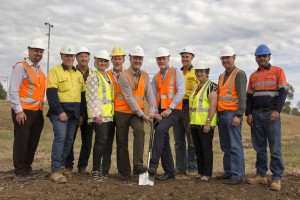 The project is jointly funded by the Queensland Government’s Building our Regions program and the Central Highlands Regional Council.

Central Highlands’ Mayor Cr Kerry Hayes said that without the $5 million funding from the Queensland Government the project wouldn’t have happened.

‘Because of changes in subsidies to local governments for water and sewerage projects over the last 10 years, work like this would have been too much of a burden for ratepayers, so without this grant this project would not have happened.

‘It’s with great pleasure that I can use this shovel to symbolise the start of another project that will greatly benefit, not only Emerald, but the Central Highlands region,’ the mayor said.

‘The upgrade to the overloaded waste water treatment plant will more than double its current capacity, help us achieve sustainable effluent irrigation and ensure we meet all the environmental legislative requirements in the future.’

The work is being completed by Queensland company Aquatec Maxcon, which has more than 45 years’ experience in the water and waste water treatment industry.

‘Local business contribution is most important on a project of this size,’ the mayor added.

‘This company recently completed a project in Kingaroy where more than 30 percent was contracted locally and they expect a similar figure to be achieved here.’

The project is expected to be completed by June 2018.

Proudly funded by the Queensland Government in association with the Central Highlands Regional Council.