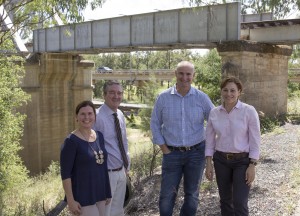 The Queensland Department of Transport and Main Roads (TMR) is moving ahead with an investigation into the raising of the Vince Lester Bridge.

Mayor Kerry Hayes says the council endorsed a report at its last meeting that updated the flood modelling based on the bridge raising.

‘This updated data clearly shows that raising the bridges and removing the old timber structure will significantly reduce the number of properties affected by flooding,’ the mayor said.

‘The department stated it is keen to move the project forward and it will form a joint steering committee to prepare a business case and options analysis.

‘I believe this response means the Queensland Government is willing to cooperate with council and sees this as a real option for our community.

‘There’s no doubt the planning for a project of this size is critical because of the impact it will have on the town.

‘The Deputy Premier, Jackie Trad, visited Emerald recently to see first-hand how the bridge raising would be an opportunity to not only provide flood mitigation, but also position a gateway to this important regional centre,’ the mayor added.