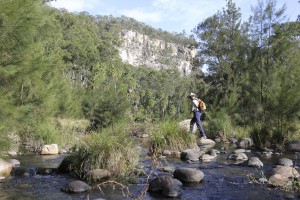 Carnarvon Gorge will get three satellite small cell mobile phone base stations under round 2 of the mobile black spot program the Australian Government announced today.

‘I couldn’t be more excited,’ was the reaction of Carnarvon tourism advocate Olivia Evans from Bandana Station when told the news.

‘There’s been two important reasons why we need mobile phone coverage out here and first and foremost is safety,’ she said.

‘There’s kilometres of walking tracks here in the national park and if someone gets injured we’ve had to rely on two-way radio, and it can take ages to organise help.

‘Secondly, it’ll be a huge boost for tourism. Social media in particular is so immediate and now people will be able to post an image of the Moss Gardens while they’re sitting at the Moss Gardens—rather than waiting four days until they leave the Gorge, when the moment’s gone.

‘I’m just so excited and thrilled. It’s the best news ever for the community, but more so for us because we’re full steam ahead with our own caravan park development.’

‘Council has supported a strategy of cluster stations to cover bigger areas rather than just isolated towers, so this is exactly what we’ve been advocating for all along.

‘There’s no doubt this news will be a tremendous boost to the tourism operators at the Gorge, the national park personnel and property owners in the area.

The Optus satellite small cell base stations will be located at Takarakka Bush Camp, Carnarvon Wilderness Lodge and the Carnarvon Gorge Visitor Centre.

The Commonwealth Mobile Black Spot Program is a three-year program with construction of Queensland’s first round towers currently underway throughout the state. To date, 19 towers announced in Round 1 have been installed.

Queensland will get significant improvements in mobile coverage with 76 new or upgraded mobile base stations to be funded via round 2 of the program, which is expected to be rolled out in the next two years.