A purple hue has lit up Emerald’s town centre in honour of Domestic and Family Violence Prevention Month. 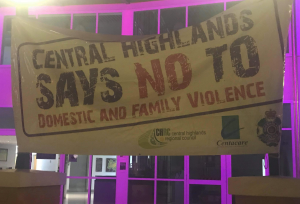 Throughout May, the council, Queensland Police Service and CentacareCQ have once again joined forces to host a variety of events throughout the month.

This has included lighting up the Central Highlands Regional Council office and surrounding trees purple and hosting the Anti-Violence March on Monday 31 May 2021.

This month will also see the unveiling of the region’s second red bench located at Blackwater’s Rotary Park.

Mayor Kerry Hayes said both the bench and march are a symbolic reminder of the continued prevalence of domestic and family violence in the Central Highlands.

‘With this timely installation of the red bench, which is part of the Red Rose Foundation’s Red Bench Project, council demonstrates intolerance to domestic and family violence,’ he said.

‘I encourage all community members to raise awareness this Domestic and Family Violence Prevention month by joining the Anti-Violence March and visiting either our Emerald or Blackwater benches.’

‘Together, as a community, we can make a difference and build a support network that says ‘no’ to any form of domestic and family violence.’

The Red Rose Foundation is a national not-for-profit charity which works to end domestic and family violence. It was established in response to the many victims who lose their lives each year in communities across the nation.

To provide a visual reminder of the devastating effects of domestic and family violence in our communities they launched the Red Bench Project.

The presence of a red bench in a communal location aims to raise public awareness and provides an opportunity for this important issue to remain visible and act as a symbol of broader support.

Access to information and resources for people affected by domestic and family violence, as well as family, friends or neighbours.

White Ribbon Day is held on the last Friday before 25 November every year in Australia. This is a time where communities come together to stand up, speak out and act, and say ‘no’ to gendered violence in Australia.

In an emergency call the police on Triple Zero (000)