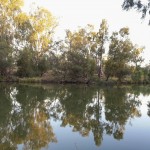 Central Highlands Mayor Councillor Kerry Hayes said he was pleased that the region’s ecosystem health had scored a ‘B’ for the second year in a row.

Agreeing with Fitzroy Partnership for River Health Executive Officer Nathan Johnston, the mayor said given the intensive agricultural and resource use in the Fitzroy Basin, the waterways were not being adversely affected.

‘I’m pleased that local government’s contribution to waterway health through water and sewage treatment has been recognised and that we achieved an ‘A’ grade for our drinking water for all our townships,’ the mayor said.

‘We’ve spent some considerable effort to get the drinking water right in Blackwater and surrounding towns over the past months, so this news is certainly welcome.

‘The Nogoa catchment was the best performing catchment, with it and the Theresa catchment area receiving a ‘B’ score, but the Comet only received a ‘C’, which is just a ‘fair’ result.

‘The poor turbidity result in the Comet was due to the low ground cover and small intense rainfall events, but the readings of copper, aluminium and iron were above recommended guideline levels and the Partnership is considering further investigation.

‘All in all, particularly considering the protracted dry spell we’ve had, I think the primary producers and the mining companies should be congratulated for the stewardship they’ve shown of the land and the waterways,’ the mayor said.

The Fitzroy Basin Report Card 2014-15 is available online at www.riverhealth.org.au