Clean Up Australia Day a success 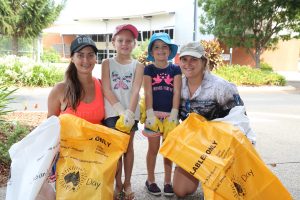 With registrations almost double of last year’s number, Central Highlanders were out in force on Sunday morning for the annual Clean Up Australia Day event.

Over 435 volunteers took to the streets, parks and waterways of Emerald, collecting almost two skip bins of litter.

Central Highlands Regional Council Mayor Kerry Hayes said the change to an 8.30 am start and extra activities had encouraged family groups to be involved this year.

‘It would be a great result for our communities, if we didn’t have to clean up, but we are determined to make our towns and streetscapes tidy and the turnout shows we are proud residents,’ he said.

‘McIndoe Park was a great location to hold the event after recent rainfall had forced a change of venue.

‘The council team who organised this year’s event are looking forward to planning for next year’s clean-up and activities.’

Between the expected drink and food containers, there were tennis and golf balls, glasses, mobile phones, dog toys, children’s toys, toothbrushes, photos, car parts and more.
Amongst the most unusual items picked up were a whirlybird and a hub cap of an old vehicle whose origin had many guessing.

Council would like to thank all volunteers who got involved and the businesses and organisations that supported them.