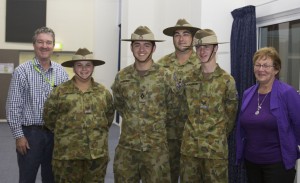 During the year the councillors visit regional centres to hold a general council meeting and community get together to give people the opportunity to meet and mingle and discuss local issues.

This week, the council went to Blackwater with a busy agenda for two days starting with a tour of the BMA Blackwater Coal Mine on Monday morning followed by a lunch at the mine before heading to the Blackwater Community Centre for the Leadership and Governance Standing Committee Meeting.

An informal community event followed with the members of Youth Inc cooking the barbeque while the councillors were treated to a performance from the award-winning members of the Academic and Talent Aspirations Program 2016 Regional Student Challenge.

The mayor also presented a cheque for $500 to the Blackwater Army Cadets to support them compete in a national drill competition.

The Finance and Infrastructure Standing Committee met on Tuesday morning where the committee agreed to go to the market with an expression of interest for the lease of the new Blackwater Aquatic Centre, due to be completed in January 2017.

A tour of the new Blackwater Aquatic Centre construction site in Hunter Street followed the meeting. The councillors were all impressed with the progress on the site and could see the new pools, the splash pad under construction and much of the ancillary building structures.

A visit to the Blackwater Golf Club was next on the agenda to discuss the potential use and storage of recycled water on the golf course. The councillors then went on to inspect a possible new home for the Blackwater Arts Society before lunching at the local Capricornian Hotel.

The general council meeting commenced at 2.00 pm. Amongst other items on the agenda, the council agreed to put forward expressions of interest for five priority disaster mitigation and resilience projects for consideration under the Queensland Government’s 2016-17 Grants and Subsidies Program funding that included: seven sites for excavation in the Nogoa River, boosting fire flow pressure in the Dingo water supply, a disaster warning system for the Sapphire Gemfields, Dingo and Duaringa SCADA, and regional floodway betterment.

Visit our councillor consultations page for more images from the visit.