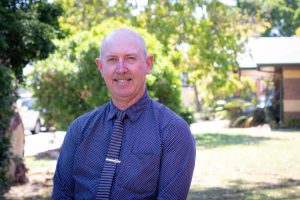 Councillor Charlie Brimblecombe has thrown his moustache behind Central Highlands Regional Council’s efforts to change the face of men’s health.

He has pledged to go clean-shaven for the first time since ‘about 1985’ if the Central Highlands Staches reach their Movember fundraising goal of $5000.

Charlie said a family history of prostate cancer was a driving force behind his pledge, which he had to run past wife Lorrae.

‘We’ve come a long way with medicine and health services, but there’s still a long way to go.

In thirty years of marriage, Lorrae has only known him with a moustache and he doesn’t know what she will think of him without it.

‘My dad once shaved his for a skin check and she said, ‘put it back on’.

Aside from regular health checks, Charlie’s tips for a healthy life are basic ones.

‘Live well, eat well, remain active and enjoy yourself and your time with others,’ he said.

The twenty-man team of council employees is well on track with $2000 raised already.

Team captain and movember-veteran Hayden Thomson said it was great to have Charlie, CEO Scott Mason and the team join men around the country in taking a stand for their health.

‘Movember, formerly known as November, is a moustache-growing charity event that raises funds and awareness for men’s health.

‘We’re doing our bit for all the dads, brothers, sons and mates in our lives.

‘Globally one man dies from suicide every minute of every day, and we’re standing up to say that’s not on.

The team are hosting a trivia night fundraiser on Wednesday 28 November at the Maraboon Tavern.

You can also help the cause by donating online at moteam.co/chrc-staches