Debbie brings bats back to Duaringa 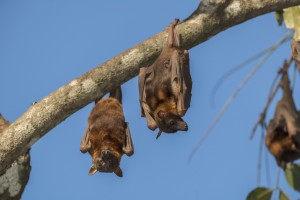 A new colony of bats has taken up residence at Mackenzie Park in Duaringa, with ex-Tropical Cyclone Debbie forcing flying foxes south just weeks after a successful dispersal program.

The dispersal was conducted under the Department of Environment and Heritage Protection’s strict codes of practice, as dictated by the Nature Conservation Act 1992.

‘On the one hand we are pleased to report that this dispersal activity was a success with the existing roost moved on,’ General Manager Communities Daniel Fletcher said.

‘However, as residents may have noticed two new groups of flying foxes have set up camp in the area in the last few days.

‘These flying foxes have unfortunately been pushed into our region by ex-Tropical Cyclone Debbie and the severe weather in north Queensland.’

‘Firstly, we will need to wait until the weather and consequent flooding has settled throughout Central Queensland before our rangers can properly assess the situation,’ he said.

‘Council will then need to gain approval again from EHP prior to conducting any further dispersal.’

Mr Fletcher also noted that it is now coming into the Little Reds’ birthing and rearing season, which may cause further delays to any dispersal.

‘We understand that flying foxes play an important role in biodiversity and ecosystem health, but also appreciate community concerns regarding their potential impact on lifestyle, health and safety,’ he said.

‘This is a very frustrating circumstance for all involved. We assure residents that council rangers will continue to closely monitor the situation and provide updates to the community.’

Mr Fletcher urged anyone with questions or concerns to contact council on 1300 242 686.