Dragon a drawcard for Emerald visitors 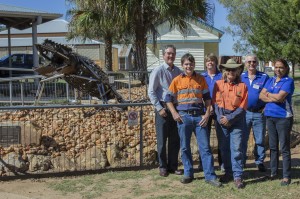 They say practice makes perfect, but in Jase Moore’s case a little welding practice has led to a unique and captivating career.

The Emerald-based sculptor and self-proclaimed ‘jack of all trades’ uses scrap metal and parts to craft eye-catching art works, from giant spiders to Ned Kelly and trucks.

‘The giant lizard sculpture was displayed at the 2015 Emerald Show and attracted a lot of interest,’ Mayor Cr Kerry Hayes said.

‘It was then purchased by a lady from New South Wales, who donated it to council to become a public art piece.’

Cr Hayes said the site at the Visitor Information Centre was chosen because it gave the sculpture great exposure and added to the existing art pieces on the Emerald Walking Trail.

‘It’s already a real talking point for visitors and locals, and is well on its way to becoming another distinctive icon for Emerald,’ he said.

‘Jase certainly is a talented artist and we’re very proud to be able to support him.’

Jase said it took just over a year to construct the Emerald Dragon, which is over three metres long.

‘I just started practicing welding in late 2012 and that’s how I got into it,’ he said of his sculpting career.

Jase said he was honoured to have his art works displayed at the information centre and also the Emerald Airport.

‘It gets my name out there and people can see what I can do,’ he said.

‘Hopefully it’s a stepping stone to something bigger.’

Jase said he gathers material for his projects from ‘anywhere and everywhere’.

‘Most of the motor and car joints in town know who I am now,’ he laughed.

The Emerald Dragon project was made possible by a Regional Quick Response Grant – an Australian Government initiative through the Regional Arts Fund, supporting the arts in regional and remote/isolated Australia.

The sculpture can be found at the information centre on Clermont St, Emerald.