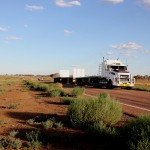 The Inland Queensland Roads Action Plan (IQ-RAP) is the key to boosting economic development and jobs in regional areas, such as the Central Highlands according to Central Highland’s Mayor, Cr Kerry Hayes.

‘Now, more than ever, our region is focussing on economic growth and development from the non-resource sector, particularly tourism, agriculture and horticulture.

‘To do this well, we need to have a robust, safe and efficient road network that will enhance the delivery of goods and services, assist in the management of natural disasters and severe weather events, attract new investors and open up opportunities for tourism.

‘This action plan identifies the strategic inland Queensland road network and prioritises upgrades over the next 18 years and is supported wholeheartedly by every regional council in western Queensland.

‘According to the plan, the Central Highlands includes a priority one and two road system and is located within key tourism routes,’ the mayor said.

‘The IQ-RAP will be used to inform both the Australian and Queensland Governments of road funding priorities across 33 regional, rural and remote local government areas.

‘It’s interesting to reflect that fifty-two per cent of Queensland’s economy, that is $150 billion per year, is generated outside Greater Brisbane.

‘There’s no doubt the plan will be an important road funding champion for this community and will enhance our bid for support for key projects such as the Yamala intermodal hub, the meat processing works and the oilseed processing facility.’

It has established a methodology for prioritisation of road network investments in the western and eastern zones of Queensland, which is based on: economic value, strategic intent, safety, access and social value.

More than 3000 kilometres of road and more than 300 bridges in regional and rural Queensland have been identified as requiring upgrades to bring them up to standard. It is expected that the work could be funded from future infrastructure and economic development.

Analysis of existing road conditions against ‘fit for purpose’ standards has identified $5 billion of works required over 18 years. This $5 billion is just 0.19 per cent of the regional Queensland economy’s contribution to Gross State Product over the same 18 year period (that is, $2,700 billion).

More information can be found at www.rdanwq.org.au