Duaringa flying foxes to be moved on 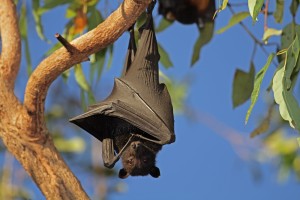 General Manager Communities Daniel Fletcher said moving the animals away from the township was ‘necessary, but unpleasant’.

‘Flying fox dispersal activity is closely regulated and monitored by the Queensland Government’s Department of Environment and Heritage Protection whose people are required to inspect the roost and ensure we have a trained and knowledgeable person present for the dispersal,’ Mr Fletcher said.

‘We understand these animals are important to the environment and nationally protected so council is committed to ensure they continue to thrive.

‘No-one really knows why Duaringa is such an attraction for the flying foxes, but common assumption is that it’s because the vegetation in the park is more conducive for their habitat than what’s left in the surrounding agricultural land.

‘It’s been identified that there are no young bats within the colony now, so dispersal will take place next week when it becomes cooler.

‘The activity is unpleasant for the community because it happens pre-dawn and involves lots of noise and light, but it’s also difficult and distressing for the animals being forcibly moved away from their “home”.

‘It’s just one of those unfortunate situations where nature and humankind just can’t co-exist in close quarters.

‘The dispersal will be undertaken by experienced contractors, assisted by council’s rangers and under a strict code of practice dictated by the Nature Conservation Act.

‘The public are welcome to watch the proceedings from a safe distance, however if anyone finds a bat on the ground they should not touch it and contact a ranger to collect it,’ he advised.

The council received a petition from Duaringa residents at its Communities Standing Committee today requesting that the bats be moved.

Central Highlands’ Mayor Cr Kerry Hayes said the request pre-empted the dispersal action already planned, but he requested that a short term action plan be developed to ensure a proactive response to flying fox issues in the future.

Council also heard of possible long-term flying fox management ideas being considered that included relocating playground equipment in Mackenzie Park and building a sustainable habitat behind the township at the old landfill site.