Emerald is now home to one of the world’s most interactive and responsive whiteboards, with the Central Highlands Regional Council the proud new owners of a state-of-the-art Surface Hub.

The powerful device, combining real-time collaboration and meeting interface features, was unveiled by Microsoft last year and only released to the market in March.

Council’s Manager Information Services Aaron Jurd said the hub was only the second to be delivered in Australia, and the first of seven to be rolled out in council offices across the region.

‘We will eventually have three in Emerald and one in each of our major townships,’ he said.

‘These devices will allow us to be more visual and tactile with people across our organisation, enabling us to connect with every corner of our region, and even the world, at the touch of a button.

‘It completely changes the experience for the user – it’s a projector, a whiteboard, a screen sharing device, a video and phone conferencing device and a tool for training and development.

‘But the really exciting thing is we don’t even know the full benefits of the hubs yet.’

Mr Jurd said the roll out of the hubs was made possible by council’s existing strong technology platform, built through partnerships with Microsoft, Telstra and Insync Technology. 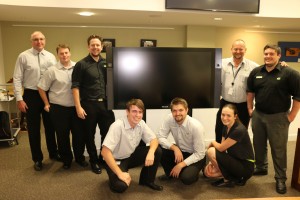 ‘Because of these partnerships we already had the infrastructure and a robust unified communications platform in Skype for Business in place,’ he said.

‘So when Microsoft brings out new technologies like the Surface Hubs we can literally just pick them up and plug them in. That means our time can be spent on ensuring we get adoption rather than figuring out how something is going to work.’

Insync Technology was one of the partners who first encouraged council to look at the new, category-defining device.

General Manager of Insync Nathan Belling said Central Highlands Regional Council is one of the most progressive councils in Australia with regards to technology.

‘Distance is less of a barrier for implementing technology for the betterment of citizens, and the council has embraced technology as a way of being more accessible to their constituents,’ he said.

Mr Jurd said technology was always growing and it was exciting to be at the forefront.

‘It means the future for us is whatever we want it to be,’ he said.

The Surface Hub was delivered to the Emerald council chambers last week, as part of a Microsoft roadshow.