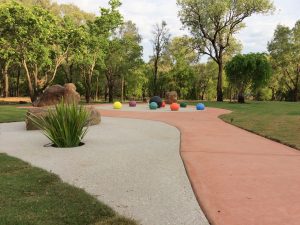 Put the Emerald Botanic Gardens on the ‘must visit’ list these school holidays is the word around town.

This week sees the finishing touches to the $590,000 beautification project funded by the Queensland Government’s Works for Queensland program.

‘The recent rain has just enhanced the whole park and really showcases the wonderful work we’ve been able to achieve.

‘This is the regions only green space classified as a regional park and it’s such a special and significant place,’ he said.

General Manager Communities Daniel Fletcher said that there’s been plenty of activity since the last update in October.

‘Work around the windmill is now finished with rows of rocks and mulching to make access to the pond safer. There’s also barriers and walkways for the school children to be able to easily access the water for their school project sampling work.

‘The new ‘orange’ pathways are finished and extend through the rainforest as well as 100 metres up the hill into the eastern side of the gardens.

‘New turf and underground irrigation has been laid around the windmill and extensively around the marbles art installation and right down around the lake on the eastern side.

‘And for runners and their four-legged friends, we have installed three new drinking fountains that are pooch friendly,’ he said.

‘What’s really satisfying,’ said Mayor Hayes, ‘Is that all the work was carried out by local contractors, which fulfilled the objective of the program to create jobs in maintenance and minor infrastructure works.

‘The Central Highlands received $2.68 million from the Queensland Government Works for Queensland program for 27 projects that included the Emerald Botanic Gardens and work in 11 other local communities.

‘The program has certainly been worthwhile in our community and we appreciate the government’s initiative,’ the mayor said.