Explore the trail of history in Duaringa 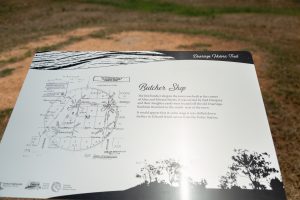 Established in the late 19th century as a railway stop on the Capricorn Highway, the town of Duaringa is a favourite amongst grey-nomads and other self-sufficient travellers.

Boasting old country charm and quality facilities, the town has become a welcome haven for its ‘guests’ who will now be able to learn even more about the community’s history and stories thanks to a new historic walking trail.

Twenty aluminium signs on locally cut rosewood posts have been erected across town, each marking a historic building from the town’s heyday. There is the old Woodman’s sawmill, the former blacksmith shop, the old Uniting Church, the former Sunshine café, which at its time was the only café between Rockhampton and Emerald, the old butcher shop, picture theatre and general store.

The project leader was Carol Finger from the Duaringa Historical and Tourism Association and Community Reference Group.

‘We are a united, caring community who celebrate our heritage,’ she said.

‘This project captures, shares and displays some of the history of our community.’

Ms Finger said compiling the information was not an easy feat, but the result was worth it for the town.

‘We hope that our guests as well local residents will take the chance to explore the town and its history and we have published an informative map of the trail sites as a guide,’ she said.

‘The map can be picked up at the visitor information centre or the post office.’

‘Local history is often only stored in the memory of long-term and older residents, and if we do not take the time to engage and listen to these stories, it will be forgotten,’ he said.

‘With the loss of history comes a loss of sense of place and identity, including the feeling or perception held by people about a place.

‘Characteristics that make the place special or unique and create feelings of attachment and belonging are known contributors to a number challenges these communities face, including population decline, loss of services and employment opportunities.

‘The Duaringa Historic Trail is the second one of its kind council has funded, the other one being the Comet Historical Trail,’ he said.

‘Both are fantastic projects that were initiated through the local community reference groups.’

In 1959, Eddie and Dave Woodman commenced sawmilling production in Duaringa after they purchased a small quantity of spotted gum hardwood at a public auction from the Department of Forestry in 1958.

Duaringa had an active horse racing club which organised local race meetings. The first annual race meeting was held on the 26 May 1883.

This modest little building was at one time the only café on the road from Rockhampton to Emerald. It was advertised as having a great and prosperous future. The building had a public dining room shop space and private dining room and kitchen. The kitchen had an ice master fridge and everything a small-town café needed to thrive.

Rae Anderson started the first Service Station in Duaringa in 1952. It was operated as the Plume service station and has had a number of owners and changes over the year.

It would appear from minutes from the Duaringa Divisional Board that the well could have been sunk before the board came into being in 1881. Duaringa was established in 1876.

St Kevin’s Roman-catholic church was built in Duaringa and opened and blessed by Bishop J. Higgins in September 1902. It was the first church to be built in the town.

The Duaringa municipal library building was opened in October 1977.

St Michael and All Angels Anglican church was dedicated in 1904 by Bishop Dawes of Rockhampton. It remained virtually unchanged from how it was built until 2015 when it was demolished and removed following a severe storm.

As the Duaringa area progressed and settlement increased the Local Government Authority established the Duaringa Divisional Board in the year of 1881. The name was changed to Duaringa Shire Council in 1903.

The first bakers at Duaringa was a combined bakery, storeroom and garage which was burnt down in 1937. The bakery at this site was built after the fire. In 1962, Vince Lester, who became the state member for Peak Downs, started his business life here.

The original post office was opened as the Colo post office on 10 November 1875. It was renamed the following month to the town’s new name of Duaringa.

The railway line from Boolburra to Duaringa was opened on 28 March 1867 after the bridge was built over the Dawson River. A free excursion for people to travel by train from Rockhampton to Duaringa was organized to mark the occasion.

The original building was owned by Mary Anne Fletcher, a widow. She started small with a case of tomatoes. Over time more goods were added. The Regal Place Picture Theatre was erected in 1925.

The first butcher shop in the town was built on the corner of Alice and Edward Street. It was owned by Ned Dempsey. Their slaughter yards were located off the old Duaringa-Bauhinia Road just south-west of the town.

The Duaringa Country Women’s Association was formed in 1925 and met at the hotel for seven years until this building was opened in 1932.

The provisional school, a bark hut was erected on the corner of George and Victoria Street which had been surveyed for this purpose. The school was opened on 3 June 1879.

The hotel was originally built near the Dawson River when the town of Duaringa was closer to the river.

With the development of the railway line, it was decided that they would move the hotel to where it sits today.

The first general store in Duaringa was opened by John Beattie after he moved from Gainsford. The store was operated by Mr and Mrs Gregg for many years.

William Anderson was born in 1881 in Aramac. William and his wife, Bridget Alice moved to Duaringa and built a house and blacksmith shop in Victoria Street.

On 5 November 1907, the first trustees were appointed to have erected a Methodist church. The building was completed and was debt free when it opened.