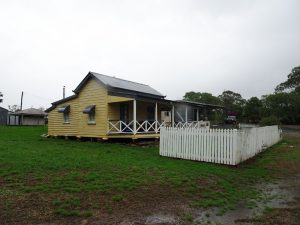 The former Rewan Police Horse Breeding Station near Rolleston has been added to the Queensland Heritage Register.

One of two police horse studs established in Queensland, it is the only one with surviving buildings and is of significant historical value for the Queensland Police Service and the Rolleston community.

Central Highlands Regional Council Mayor Kerry Hayes said following the addition to the state register in May, it was important for council to also observe and record the important piece of local history on our own local heritage lists.

‘The Central Highlands region has a rich agricultural heritage and many areas of historical significance,’ Mayor Hayes said.

‘Council appreciates the formal recognition of the Rewan Police Horse Breeding Station, sought by the current property owners, to the Queensland Heritage Register.

‘The station is located on the way to one of our major tourist attractions at Carnarvon Gorge National Park and not far from the memorial crash site of a World War II aircraft.

‘As such, it adds to a suite of interesting tourism sites as well as being an important part of Queensland’s history.’

Mayor Hayes noted that the Rewan Station is privately owned, and the buildings are currently not accessible to the public.

Three buildings remain standing on the station complex, including the commissioner’s cottage and its fenced garden from 1911, a former meat house from 1918 and stables from 1911. Established in 1909 the station spanned across 108,000 acres and supplied 1029 trained remounts to the Queensland Police Service. The station was closed in 1934 and divided into two pastoral properties and allocated by ballot.