Gai Sypher sworn in as councillor 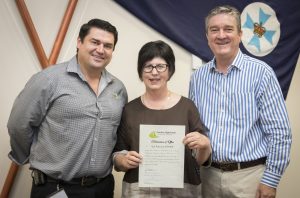 Nine candidates nominated for the position, which was left vacant following the resignation of former councillor David Lacey.

A full postal ballot was held on 30 September 2017 and the results were declared by the Electoral Commission of Queensland on Wednesday.

Cr Sypher served as councillor for four years from 2012 and has enjoyed an 18-year long career with the Central Queensland University.

‘Gai will once again have the privilege of serving our region,’ he said.

‘With the experience she has gained in her very public life and her previous time in the chambers, council and the community can look forward to her contribution.

‘I’d also like to recognise everyone who put their hand up for this rewarding yet challenging role. Serving and leading our regions is a great honour and commitment.’

Cr Sypher will be officially welcomed back at the General Council Meeting in Springsure on 24 October 2017.