Give a hoot and report those who pollute 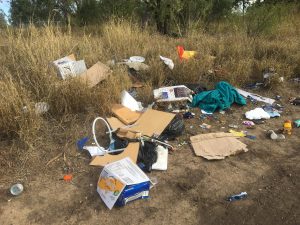 Central Highlanders are fed up paying the price for illegal dumping.

So, it’s time to band together and bring offenders to account.

In a bid to stamp out this anti-social behaviour, Central Highlands Regional Council has launched a campaign urging residents and visitors to the region to ‘give a hoot’ and start reporting illegal dumping.

‘This is clearly something our community does not approve of, but a recent survey showed that people are unsure what to do when they witness it. So, we’ve made it simple – pick up the phone and call us on 1300 242 686.’

Mr McDougall said callers can remain anonymous and any reports that fall under council’s jurisdiction would be passed on to the waste team to investigate.

‘As the name suggests, illegal dumping is illegal under Queensland law and can attract fines of more than $2000 for individuals and $10,000 for corporations,’ he said.

‘I truly can’t understand why anyone would risk paying a fine when it’s free to dump general household waste at our tips. Our commercial fees vary from $10 to $400 depending on the material, but that’s still a lot cheaper than a fine, or worse – going to court.’

Mr McDougall said with the help of state government funding, council had installed surveillance cameras and signage at some known dumping hot spots in the region to deter offenders and encourage reporting.

‘We are watching, but we need you to watch too,’ he said.

‘Catching offenders is hard, but we can try by working together. Our wonderful towns are too loved for illegal dumping to be accepted any longer.’

Illegal dumping on highways or other roads controlled by the state government can be reported directly to them via their pollution hotline 1300 130 372.

For more information on illegal dumping and littering visit: https://www.qld.gov.au/environment/pollution/management/waste/litter-illegal-dumping

Or watch this educational video aimed at school children: