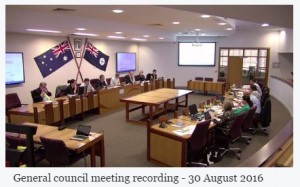 In a first for the Central Highlands, this week’s general council meeting was streamed live to the public.

He went on to say that it was  a historic day and that he and the councillors are intent on being an open council and the  livestream was one of the many ways that the council sought to communicate with the region’s residents as part of its communications strategy.

The council’s Information Services Team has worked with specialist contractors over a number of weeks to install the technology in the Emerald council chambers, which includes a dedicated computer, several large wall-mounted monitors, sound recording, a camera and an automatic control panel.

According to the mayor, the investment in the technology and equipment is not limited to recording council meetings and will be used for video and  teleconferencing and training to take advantage of platforms like webinars, which will save councillors and staff time and expenses in travel.

A link to the livestream of meetings will be made available on council’s website and Facebook page on the day of the meeting and it is intended the recordings be archived for future reference.