Large volumes of the invasive hymenachne weed have been eradicated from the banks of the Nogoa River, as part of a council-led control program.

Over the last three weeks, rangers from the Central Highlands Regional Council have tackled the problem grass with herbicide between the John Gay Bridge and the Vince Lester Bridge.

The control program is supported by the Department of Agriculture and Fisheries and Sunwater, with areas of the Fairbairn Dam to be targeted as well.

Hymenachne can grow up to 2.5 m high and has become an unwanted pest of stream banks, wetlands and irrigation ditches across Queensland.

General Manager Communities Daniel Fletcher said not only was it an eyesore for visitors to the Botanic Gardens, it also clogged up the waterways and reduced the flow capacity of the river.

‘It wraps around water pumps and other vital infrastructure, which can also cause issues,’ he said.

‘Unfortunately the conditions here are ideal for it to spread and grow, but we hope this program will put a big dent in the problem.’ 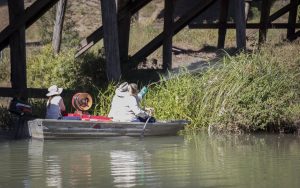 Mr Fletcher said the control program was also a step towards revitalising the river for recreation purposes, a potential community project on council’s radar.

‘Investigations are underway into how we can beautify areas along the river and take advantage of this wonderful asset we have,’ he said.

‘There’s a lot of work to be done, but programs like this are a great start.’