Local artist ‘chuffed’ to share story of resilience and optimism

For Derek Hedgcock, community art is all about storytelling and his latest design tells one of the undeniable resilience and stoic optimism of the Central Highlands.

The piece, entitled ‘We Can’t Fly! But… We’re Telling You’, was recently selected via a public vote to be installed in the Emerald Botanic Gardens as part of a $20,000 council project.

Artists living in the region were invited to take part in an Expressions of Interest process for the project and the final choice came down to Mr Hedgcock’s proposal and one from the talented Michelle Gray.

Mr Hedgcock, who lives in Emerald, said his artwork was designed with the iconic John Williamson song ‘Old Man Emu’ in mind.

‘Like the line in the song, this piece celebrates our people’s capacity to overcome and circumvent life’s challenges and obstacles,’ he said.

‘It reflects the spirit of success this community collectively has.’

Over 700 community members voted for their favourite piece, with Mr Hedgcock’s proposal coming out on top.

Featuring a plumage of the native Australian birds trailed by a kangaroo, the steel artwork will be located behind the Federation Pillars and Yarn Pit on the eastern side of the gardens.

Mr Hedgcock said he was very excited when he received the good news.

‘It’s quite an honour to be chosen and I feel grateful to have had this opportunity.’

Derek said while painting was his original medium of choice, he moved into metal work in 2007.

He said he loved that community art could speak to everyone, not just a particular person or group.

‘It’s important that community art tells a story that resonates with people generally,’ he said.

‘Storytelling is an essential aspect of humanity.’

Mayor Kerry Hayes said council often talks about infrastructure projects or sports and recreation initiatives, so it was refreshing to see a project that supports the arts and cultural community, particularly after the austerity of 2020.

‘The decision to invest in the artwork has a couple of important benefits: it will stimulate cultural tourism by adding another high-quality piece of public artwork to the Emerald Botanic Gardens but, most importantly, it supports a local artist like Mr Hedgcock.

‘As a community, we are very fortunate to have many great artists in the region who are proud and passionate— projects like this support their talent and encourage those coming behind them,’ he said.

Mr Hedgcock will create the piece in his workshop over the next few months, with it to be placed into its new home in the first half of 2021. 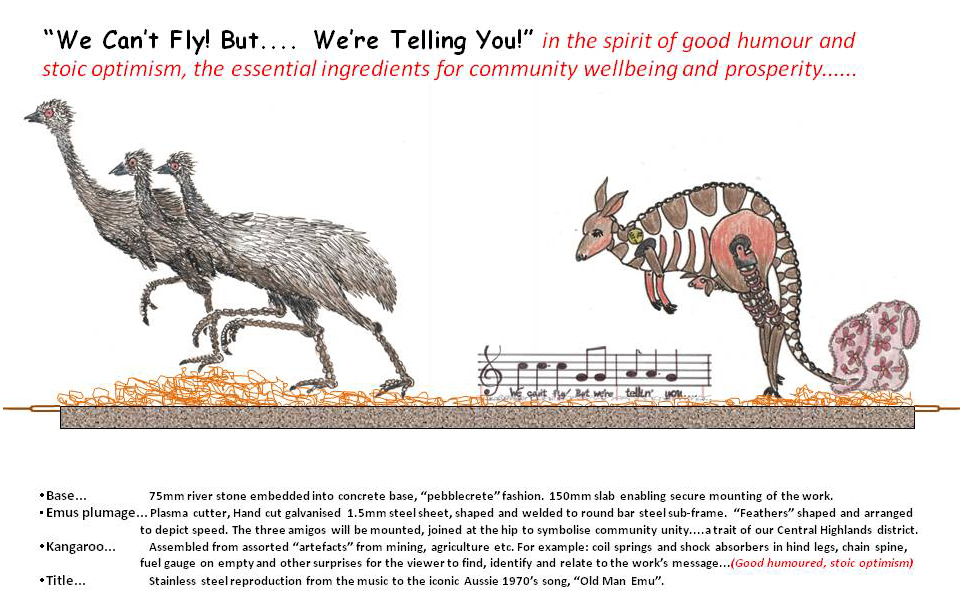