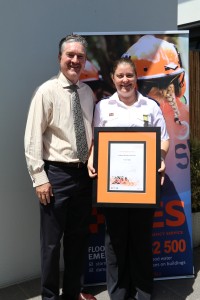 State Emergency Service volunteers were recognised for their service to the Central Queensland community at a ceremony held in Rockhampton on Sunday 16 October.

Member for Rockhampton and Minister for Police, Fire and Emergency Services, the Hon. William Byrne presented the awards as part of SES Week celebrations.

He was joined by Mayors from Banana, Livingstone, Central Highlands, Gladstone, Isaac and Rockhampton Councils along with representatives from Queensland Police Service and Queensland Fire and Emergency Services.

Central Highlands Mayor Cr Kerry Hayes said it was great to see our wonderful unpaid volunteers receiving recognition for the amazing efforts they put in to assist their community.

‘While others are out enjoying sports or relaxing at home our SES volunteers are training or responding to emergencies away from their families. We just don’t know how lucky we are to have such a passionate team of people.’

Nichole Philips, the Emerald SES Group Leader was bestowed with the prestigious Regional Member of The Year Award. It was awarded for her ‘continued dedication, passion and commitment to SES volunteer training support, positive promotion of the SES in the Central Highlands and commitment to Operation Water Rats in bringing groups from throughout Queensland together for training and networking.’

Central Highlands SES Local Controller Michelle Bell said she was so proud  to be part of the ceremony that honoured SES volunteers and in particiular of the three Central Highlands award recipients for their dedication and support.

‘Recognition like this is not just given, but earned. Congratulations Craig, Tony and Nichole you deserve this honour, and have definitely earned the recognition.

‘I am just so proud of all of my SES volunteers in the Central Highlands. They do it because they love it. They’re our unpaid profesionals.

‘Thank you to all our SES volunteers for every thing you do.’

Nichole is now in for the running for State Member of the Year. She will travel to Brisbane next weekend to attend the State awards ceremony.