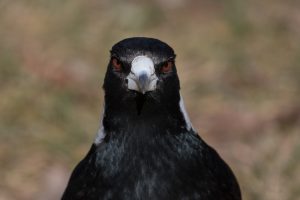 Spring has sprung and the swooping has begun.

As the weather warms up and the flowers start blooming, residents are being warned to watch out for protective magpies during breeding season.

‘Only a small proportion of magpies become aggressive and attack people when protecting their nest,’ he said.

‘Magpies will usually only defend a radius of about 150 metres around their nest tree, so it’s best to try and avoid walking or cycling close to areas where you know there is an aggressive bird.’

If you have to walk or cycle near magpie nests there are a number of simple steps you can take to deter swooping:

‘Studies have shown that when a male magpie is removed, another male will often take on the role of defending the female and chicks,’ he said.

‘This suggests translocation isn’t a very effective solution and should only be used as a last resort.’

Mr Fletcher encouraged residents to report any aggressive magpies to council by calling 1300 242 686.

‘You can also add details of a swooping incident to the national crowd-sourced magpie alert map at www.magpiealert.com and check out other reported attacks to know which areas to avoid,’ he said.

Breeding season usually lasts until late October, but can extend to December.

For more information and tips on staying safe from swooping magpies visit www.ehp.qld.gov.au