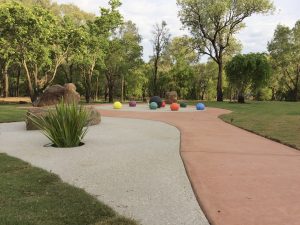 Upgrades to the east side of the Emerald Botanic Gardens may be nearing completion, but on the west side things are just getting started.

Over the next two years fitness equipment, shared pathways with solar-powered lighting and drinking fountains, and new barbecues will be installed, thanks to the state government’s Local Government Grants and Subsidies Program (LGGSP).

The $709 000 grant will cover half the project costs, with the Central Highlands Regional Council funding the remainder.

General Manager Communities Daniel Fletcher said the project would build on the fantastic works already carried out on the east side of the park.

‘We were very fortunate to secure funding earlier this year for the eastern part of the gardens under the Works for Queensland program,’ he said.

‘Council crews have been busy at work over the past few months, reconstructing the footpaths, revitalising the ‘marbles’ art piece and installing drinking fountains.

‘There is still a bit of work to be done, including laying turf, building some new garden beds, tree planting and some repair works following recent rain. However, we expect all of this to be completed by the end of November.’

‘This involved placing a row of large rocks around the pond, as well as some low-growing shrubs and water-tolerant plants, and increasing warning signage around the area,’ he said.

‘There will still be access points for school students, who often use the man-made pond for environmental studies, but a clearer barrier for the general public.’

‘The Botanic Gardens are the crown jewel in our regional park network,’ he said.

‘Improving the facilities and accessibility will encourage more people to utilise this unique and beautiful part of our community for recreation, socialising and fitness – all attributes of a great place to live.’