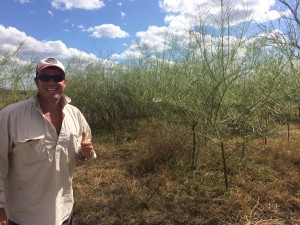 The Central Highlands Regional Council has unleashed a weapon of ‘moth’ destruction on the woody weed, parkinsonia.

Populations of a tiny South American moth, commonly known as the UU moth, were released at Comet River near Springsure in October last year and near Rolleston last month.

The moth is a parasite to parkinsonia, as the weed’s leaf is the only source of food for the caterpillar form of the insect.

Over the next six to twelve months the population will hopefully establish itself in the area and begin reducing the impact of parkinsonia.

Parkinsonia is a national pest, forming dense thickets and taking over grazing areas. The moth won’t kill the plant completely, but it will act as a biological control by degrading the plant’s ability to grow and making them more susceptible to other pest management measures such as chemicals.

The control measure was funded by the Department of Agriculture and Fisheries, and facilitated by council in conjunction with the Central Highlands Regional Resources Use Planning Cooperative.

Successful trials of the moth have also been carried out in parts of the Northern Territory in recent years.