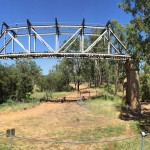 Approximately 310 000 cubic metres of soil will be removed from the Nogoa River around Emerald in coming weeks as the next phase of a river improvement strategy commences.

Emerald residents said they felt strongly about clearing out the river as a form of flood risk management during a series of public information sessions that the Central Highlands Regional Council hosted last year.

According to modelling by engineering company KBR, localised flooding reductions of up to 30 centimetres in a flood the size of the 2010-11 event could be expected.

A total of eleven sites will have some vegetation and soil removed with the most visible being around the Vince Lester Bridge, however minimal interruption to the use of the footbridge is anticipated.

Upstream of the bridge, an area on the eastern side of the river opposite the Botanical Gardens car park and entry will have some vegetation and soil removed.

An ‘island’ downstream from the bridge will have vegetation removed and it will be lowered by approximately two metres.

While the council has not committed to constructing levees, soil that is removed from these areas will be stockpiled nearby to save time and money removing the soil from the site.

The eleven sites have been segmented into groups and tenders called for each group.

Annual maintenance of all river clearing sites will be undertaken by the council.

The first part of the river improvement strategy—vegetation thinning was completed at 12 sites in August 2014.