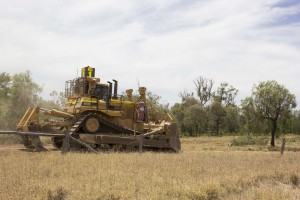 Central Highlands’ councillors were advised this week that flood mitigation project in the Nogoa River is completed.

The project took more than two years to arrange and a mere couple of months to finish.

Mayor Kerry Hayes said it was a satisfying outcome.

‘We are acknowledging that it’s six years since the last flood in Emerald this summer and it seems that solutions are often agenda items being talked about, so it’s really rewarding to actually see results on the ground,’ the mayor said.

‘The project included clearing soil and vegetation from four sites in the river at Codenwarra and downstream of the Vince Lester bridge in Emerald.

‘It’s estimated that around 270,000 cubic metres of soil has been moved from in and around the river to aid the flow of water in flood conditions based on expert hydraulic engineering modelling.

‘It’s worthwhile visiting our website to see the aerial drone footage of the Codenwarra site to get a feel for the scale of the project.

‘I’d like to thank not only the local contractors for their excellent work on this job, but also the council staff that have persisted in such a professional manner despite the many setbacks and frustrations involved in bringing this project to completion.

‘This week marks just two months before the next crucial flood mitigation decision when council meets to discuss the final business case for levees in April,’ the mayor concluded.

Link to aerial drone footage on You Tube.