Celebrate a piece of community and medical history and take a step back in time to re-live the life changing stories of 150 years of the old Springsure Hospital.

The old hospital, turned museum in 1988, celebrates its milestone with a special anniversary exhibition opening on Saturday 18 August. Join the community, councillors and council staff from 10.00 am for the official opening followed by morning tea in the hospital gardens.

‘The old hospital is certainly part of our region’s heritage and an asset to rural communities from a historical perspective,’ she said.

‘It has no doubt witnessed the most beautiful and saddest moments in life within the Springsure community and we’re looking forward to celebrating and recognising all of these stories.

‘Local people are very proud of their contribution to health and contributed considerable financial donations for the present modern hospital.

‘I encourage everyone to come along and dive into the history of the museum and the Springsure community.’

The event will be catered by the Country Women’s Association and includes performances by local school choirs.

History of the hospital

The hospital is one of the oldest surviving hospitals in the state and it was the first hospital in Springsure. Built by locals in 1868 it was completed in just six months. Building materials were sourced locally with masonry cut from the area, a timber shingle roof and gothic-style timber bargeboards.

The shingles are still intact but were later covered by iron roofing imported from England. Unusual for Central Queensland, the building has three fire places and large double French doors opening out onto the verandah. When open, the doors allowed for a breeze through the hospital on hot summer days.
A local community board of volunteers ran the hospital that serviced the area until 1938 when a second hospital was built. From then on, the old hospital was used as a recreation facility.

Finances for the operation of the hospital were sometimes scarce and the Bauhinia Shire assisted with donations, while the community funded the remainder.

The second hospital was handed over to the Queensland Government in 1940 who appointed a board of locals to operate it. Local hospital boards lasted until 1991.

In 1988, the first hospital building was handed to the Bauhinia Shire Council and restoration was undertaken when the Premier at the time Mike Ahern officially opened the Springsure Hospital Museum.

The building was heritage listed in 1992 for its unique design and state of repair.

To attend the official opening of the 150-year anniversary exhibition and to join the morning tea, please RSVP by Wednesday 15 August 2018 for catering purposes to mthomas@chrc.qld.gov.au or phone 4981 4100. 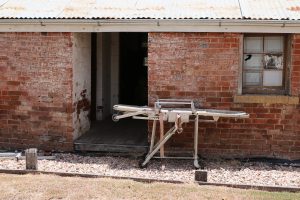 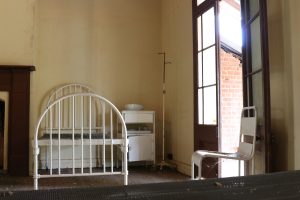 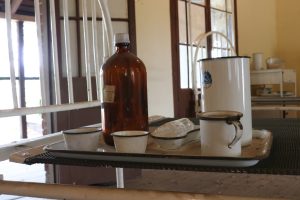 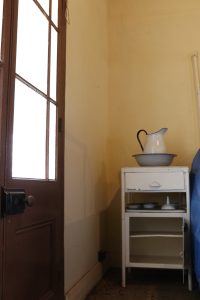 A bedside table with a washing bowl and water jug. 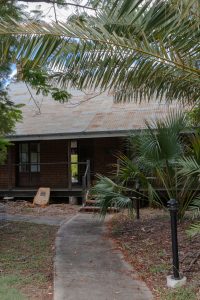 The entrance to the old hospital.