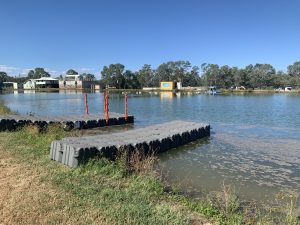 Pedestrians will be able to cross the northern end of the Nogoa River again via a floating bridge. Central Highlands Regional Council is planning to have the modular pontoon-like structure installed beside the Vince Lester Bridge at the Emerald Botanic Gardens at the start of May.

General Manager Infrastructure and Utilities Gerhard Joubert said council had conducted a test installation after taking delivery of 167 blocks that form part of the bridge.

‘It’s a modular docking system made up from plastic blocks that float on the water,’ he said.

‘The bridge will be three blocks wide at the start – that’s about one and a half metres.

‘As we receive more blocks, we’ll add a further row to make it two metres wide.

‘A handrail will also be part of the build.’

Mr Joubert said the type of modular bridge was commonly used in construction and a quick solution.

‘Repair of the existing old timber bridge would run into the millions of dollars, so for the time being the modular bridge is a fast and cost-effective solution.’

He said the modular bridge was durable and could be re-used and relocated on an as-need basis.

Central Highlands Regional Council and the Department of Transport and Main Roads closed the old timber pedestrian bridge to public in March due to its structural condition.

Given the heritage value and significant cost associated with the demolition of the bridge both parties have formed a working group to develop a project plan considering all issues and ensuring an appropriate outcome. The timeline is not known yet.