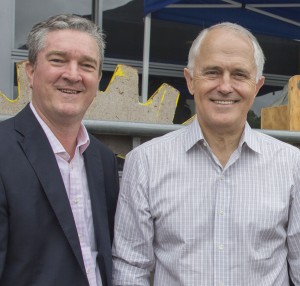 Prime Minister Malcolm Turnbull visited Emerald today as part of his Regional Budget Tour. Mr Turnbull attended a community barbeque at McIndoe Park Function Centre where hundreds of Central Highlands’ locals had a chance to mingle and take ‘selfies’ with the affable and accessible PM.

In a brief address, Mr Turnbull gave an overview of the Budget items aimed at rural and regional areas and spoke about education and opportunities for young people to the many school children in the audience.

Later in the afternoon the Queensland shadow cabinet held a meeting in the Central Highlands Regional Council chambers before heading to the ‘Irish’ for a politics in the pub session.