Prisoners participating in the Springsure work camp program have completed more than 3400 hours of maintenance and construction labour in the local community since July last year, equating to approximately $800 000 in value.

The Queensland Corrective Services program is one of the most successful prisoner rehabilitation schemes in the state, providing low-risk prisoners with opportunities to make a positive contribution to society while developing new skills and work ethic. 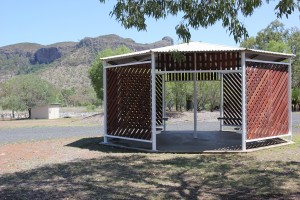 Prisoners in the work camp program helped refurbish this rotunda at the Springsure Cemetery.

In the past eight months, participating prisoners from Capricornia Correctional Centre have performed ground and building maintenance at a number of sites around Springsure.

They have also helped to construct sheds for the Lions Club, police station and pony club, interpretive signage at the national park, a grated drain for the Springsure Golf Club’s clubhouse, a new toilet block at t

he Lions Park and improved loading ramps at the showgrounds.

‘These prisoners are given a genuine opportunity to rehabilitate themselves and gain valuable skills and knowledge for their return to society,’ she said.

‘But as well as that, our regional community benefits by having a source of labour to undertake projects or community work that may not have otherwise been completed.’

The Springsure work camp is one of 13 in Queensland.