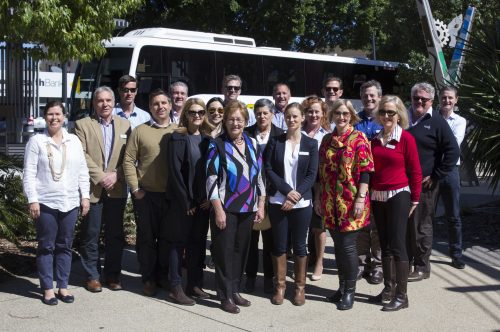 Representatives from the Queensland Treasury’s Regional Perspectives road show dropped into Emerald this week for an ‘on the ground’ look at the Central Highlands.

The group included Under Treasurer of Queensland Jim Murphy, as well as senior leaders from QIC and the LGAQ.

‘We took the delegation on a bus tour around Emerald, showcasing some of the economic drivers and emerging industries here in the Highlands,’ Cr Hayes said.

‘This included inspections of the proposed sites for the Emerald Entertainment Centre and the CQ Inland Port at Yamala, the Hinkler Park Plantation’s macadamia nut nursery and Fairbairn Dam.’

The delegation also sat down with council to discuss key priorities and strategic direction for the region.

‘This was a fantastic opportunity to show off our region and highlight the opportunities and challenges we are facing,’ Cr Hayes said.