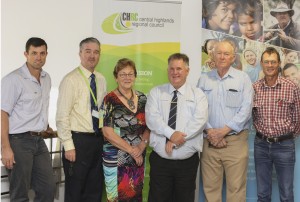 Improved health services and a potential east to west link were high on the agenda at the Regional Airport and Aerodrome Forum in Emerald last week.

Central Highlands Mayor Cr Kerry Hayes said council were grateful for the opportunity to host this year’s instalment, following on from the success of the inaugural forum last year.

‘This forum was an initiative of the Rockhampton Regional Council, particularly Cr Neil Fisher, and it’s a fantastic chance for airport operators to come together and discuss operational matters,’ he said.

‘But even more importantly, it allows us to work together to reduce associated operational costs, advocate for improved services throughout our airports and strengthen our alliances.’

This year’s guest speaker was Cr Paul Bell AM, Chair of the Central Queensland Hospital and Health Board.

Cr Bell spoke of the importance of using the region’s airports to expand Central Queensland’s health services and reduce the $27 M spent on subsidised patient travel in 2015/16.

He said by linking the region’s airports, principally from the west to the east, councils would be able to provide better services to patients and eliminate the need for long drives to Rockhampton from small communities for treatment.

‘These robust and innovative discussions are really motivating and provide the foundation for ongoing partnerships to better our services,’ Cr Hayes said.

‘I’d like to thank everyone who came along for their contributions, and I look forward to meeting again soon.’