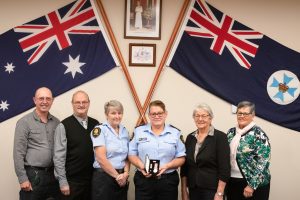 The former Longreach SES group leader was presented her medal on 8 May 2019 at Government House, Brisbane.

‘I congratulate Ms Peters for her outstanding achievement and contribution to our communities,’ Ms Nixon said.

‘Ms Peters has been a member of the SES since 2005 and was awarded for her services as a group leader in the Longreach SES unit.

‘Now an Emerald local, we are extremely proud to have her contribute, not only operational expertise to our SES, but also her passion and dedication to our community.’

Ms Peters has already contributed to two major events as an Emerald SES volunteer. In November 2018, she was part of the crew delivering supplies to the wildfire affected Carnarvon Gorge area and in February 2019 she was one of the local volunteers assisting with the flood clean-up in Townsville.

Ms Peters said she was humbled to receive the medal.

‘I’m very humbled and I would like to thank my family, especially my husband and son and the Longreach community for their support and also the Emerald community for having me start up again in their area,’ Ms Peters said.

She said she looked forward to sharing her experience with other volunteers in the region, and to inspiring younger people become active SES volunteers.

‘People have been asking me about joining the SES in Emerald and I encourage them to come and join, it could lead them onto different paths in life,’ Ms Peters said.

‘It is rewarding to be out there helping the community, I don’t do it to be recognised.’

Ms Peters said she was impressed with the medal presentation in Brisbane.

‘There were 22 other medal recipients from other walks of life and just being there with the other recipients was something worth experiencing.’