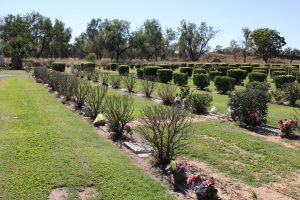 A section of disease-ridden hedges at the Emerald Cemetery has been removed this week following an outbreak of white scale.

The tiny sap-sucking insects had infected the plot-separating hedges, moving quickly throughout the cemetery.

Central Highlands Regional Council Manager Parks and Recreation Mark Giebel said despite the best efforts of parks and gardens crews, the plants could not be saved.

‘Visitors would have noticed the hedges looking pretty under the weather lately,’ he said.

‘Our crews take a lot of pride in maintaining the cemetery and ensuring it’s a welcoming, peaceful environment. The hedges were treated twice, but unfortunately the scale continued to spread and we had to make the tough call to remove a large portion of the murraya hedges before it got worse.’

Mr Giebel said the hedges would be replaced with something more practical and cost-effective.

‘It took two staff members a whole day each month to tend the hedges, so we will look to replace them with something that requires less maintenance.

During the hedge removal, three large trees in the entranceway will also be removed.

‘Unfortunately, their roots have crossed into the lawn and are disrupting the first few rows of plots.

‘While parts of the facility are in a transition period, we are doubling our efforts on other parts to keep the cemetery looking great. The rose garden surrounding the columbarium wall is in full bloom and has received numerous compliments.’