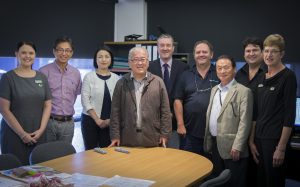 Cr Hayes was extended the invitation from Ichinoseki City Mayor Osamu Katsube earlier this year, in reciprocation of his trip to the Central Highlands in August 2016.

In his letter of invitation to Cr Hayes, Mayor Katsube said the Japanese delegation ‘took great pleasure in experiencing first hand all the technology, history, culture and charm the Central Highlands has to offer’.

‘On top of that, the fact we could talk and share ideas was also very meaningful,’ Mayor Katsube said.

‘Though our cultures and environment may be different, we share the mutual goal of wanting to better our cities.’

The two councillors and one or two other senior council staff members will travel to Ichinoseki in February 2018.

‘During our stay we will inspect some of Ichinoseki City’s commercial assets, including a motel and conference centre, visit the saleyards and a waste disposal centre, learn about disaster preparedness and attend the region’s historic water festival,’ Cr Hayes said.

‘There is so much to be learnt from the Japanese culture, from business principles and work ethic, to community engagement and environmental efficiencies. We share many of the same priorities, challenges and responsibilities, and I am very much looking forward to bringing back this knowledge and applying it to our own organisation where we can.’

Cr Hayes said the visit was an extension of council’s annual student exchange program, which enables local high school students to experience a homestay in Japan and learn more about the country’s traditions and customs.

The Sister City agreement has existed since 1993 and aims to foster mutual understanding and good will between both council areas, and globally, to contribute to world peace and prosperity.