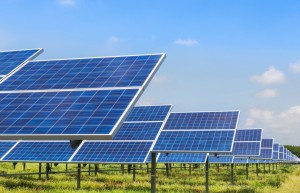 The Central Highlands Regional Council has received an influx of solar farm applications recently, highlighting the region’s readiness for investment and innovation.

Three applications have been approved by council’s planning department, including one from 2015 that is now nearing the construction stage.

A further three applications are currently under assessment and, based on additional enquiries, more could be on the cards.

Mayor Cr Kerry Hayes said the interest was spread right across the region, including locations at Emerald, Tieri, Blackwater, Bluff, Dingo and Rolleston.

‘We are seeing both national and international companies, with branches here in Australia, applying,’ he said.

‘This is a testimony to how open our region is to alternative energy proposals and the diversification of economic opportunities.’

‘We are located at a perfect distance from the equator, meaning we have longer daylight hours and a high occurrence of fine weather,’ he said.

‘We are also out of the cyclone impact zones and, while our weather is hot a lot of the time, we still have periods of lower temperatures that allow a cool layer of air to pass over the panels.’

There are also no infrastructure charges applicable to renewable energy facilities.

‘Council’s planning department recognise the role that a planning scheme plays in creating opportunities for economic development and attracting investment to the region,’ he said.

‘We have streamlined the application process as much as possible to encourage innovative business ventures like solar farms and build national confidence in our region as one of growth and prospect.’

He said they also have a limited lifecycle and the land is returned to pre-development standards once the solar farm is decommissioned.

‘Solar farms also produce less glare than a body of water,’ he said.

‘So the risks are minimal, but the potential benefits to our region in terms of capital, employment and environment are huge.’

The total area of proposed solar farms in the region, both approved and under assessment, is almost 2000 hectares and over 800 MW.