The Blackwater Netball Association will be receiving a very special Christmas gift this year, with a new club shed and amenities block to be built in coming months.

The shed will align with the construction of the $15 M Blackwater Aquatic Centre, which is funded by the Central Highlands Regional Council, the Australian Government’s National Stronger Regions fund and BMA.

The amenities block will be funded by an $80 000 Get Playing Places and Spaces grant from the Queensland Government’s Department of National Parks, Sport and Racing.

Mayor Hayes said council was proud to support the club, which has a membership of almost 150 women, girls and boys.

‘For a long time the club has been meeting and operating out of a building in need of significant repair,’ he said. 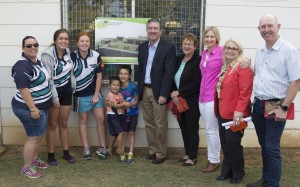 ‘These new facilities will not only improve the function of the club, but also hopefully attract more members and bigger events to the town. It will also provide a fantastic frontage for the Hunter Street Sport Precinct.’

Preliminary ground works are expected to begin next week, with the project due to be completed by Christmas.

The area will include a 6 m x 12 m shed with a 4 m undercover assembly area, lots of secure storage and the canteen. This will be connected by concrete pathways to the new toilet block and disabled parking. The works will also include new seating and a grassed area along the courts.

‘We are so pleased to be able to help out this association and we look forward to seeing the club prosper and grow in the years to come,’ the mayor said.