Springsure Stingers in the swim 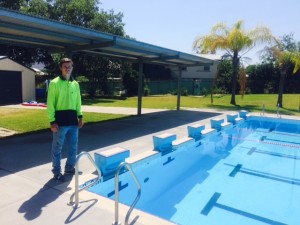 Springsure pool attendant Will Howard with the ‘old’ starting blocks.

Summer’s come a bit early to the Central Highlands this year, but the Springsure Stingers swimmers are feeling pretty cool after a visit from the councillors on Tuesday.

Councillors visited the 25-metre swimming pool complex in Springsure in between meetings for a thorough inspection of the facility in advance of a petition to be tabled at their general meeting that afternoon.

‘We have a really strong club with 75 registered swimmers,’ Ms Mattey said. ‘Our swimmers are at a real disadvantage when they travel because they train on the old-fashioned blocks and most modern pools have sloping starting blocks.

Ms Mattey said that local teacher Tracey Roberts has shown a keen interest in the swimming club and is coaching the children, many of whom are competing at regional level.

She said the club actively seeks funding from various grant sources and do lots of fundraising activities, but the pool is just ‘old’ and many things, such as the lane ropes, need replacing or upgrading.

Councillor Gail Nixon, who led the pool inspection and advocated on behalf of the Stingers, said the matter of the starting blocks and some other infrastructure improvements are now front and centre for consideration through the council’s program of works.

Ms Mattey also said the lap timing clock had ‘disappeared’ at some stage, so the club was very pleased to receive a donation of $1700 from the council at the community barbecue that evening to have the timer replaced.