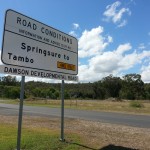 ‘While some strategic regional funding programs received increases and the Transport Infrastructure Development Scheme (TIDS) road funding is confirmed for a further three years, it was key state roads running north-south that have been ignored.

‘Given the critical nature of these roads and the somewhat embarrassing fact that they carry a significant portion of the state’s high-end cattle production to abattoirs and ports, I can’t believe that they couldn’t get any consideration given the importance to Queensland’s economy and to this region as the resource sector contracts.

‘The Bauhinia-Duaringa Road, Blackwater to Rolleston and Springsure to Tambo Roads were precluded from the federal government’s Northern Australia Beef Roads funding due to their location below the Tropic of Capricorn and now they don’t appear to fit into the Queensland Government’s strategy either, which beggars the question; where does the importance of our beef industry rest?

‘In the very same region and on the same roads are some of the most beautiful natural national parks and tourist attractions in the state, but visitors are put off by poor access on the state roads network.’

Cr Hayes reiterated that regional Queensland isn’t looking for handouts. ‘Put simply,’ he said. ‘Its communities deserve an equity of access to conduct their business and promote tourism as the rest of Queensland.

‘Local councils west of the divide work incredibly hard with regional offices of the Department of Transport and Main Roads to gain suitable funding to seal roads critical to their economies but generally receive what can only be described as “piecemeal” packages that end up being wasted by unsustainable gravel sheeting.

‘The budget is another chance missed. It’s not just the Central Highlands that loses, it’s the whole state,’ he concluded.