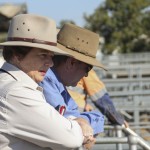 Central Queensland saleyards operators now have a seat at the ‘big table’ as Central Highlands Regional Council’s General Manager of Commercial Services Michelle Webster joins the board of the Australian Livestock Markets Association.

The Association commenced in July 2010 when Saleyard Operators Australia joined with Saleyards Association Queensland and operators in South Australia and Victoria to unite in a national body to represent saleyards.

Using the catchcry, ‘From Mareeba in the north, Ballarat in the south and Naracoorte in the west’, the saleyards that have joined the Association number more than 100 and interest continues to grow.

According to the association’s website, members transact 5.3 million units (sheep, cattle and pigs) with a value in excess of $3 billion and represent 70 per cent of the nation’s saleyard throughput.

Mrs Webster is one of 12 directors that meet four times a year to oversee the operation of the association alongside an executive officer and a field representative. The association is funded by levies from member saleyards based on throughput and cash reserves held.

‘Saleyards are an essential agricultural economic hub in many rural towns and have been for generations,’ Mrs Webster said.

‘The Emerald Saleyards, owned and operated by council, is one of the most consistent yards in Queensland in terms of throughput and patronage.

‘Being in the heart of beef cattle territory and with the cattle market being extremely buoyant right now and expected to stay that way for a while to come, I think it’s a great benefit to have the region represented on the board of the peak industry body.

‘It’ll give us a chance to be at the front end of decision making in terms of saleyard business but, more importantly, it gets our local and regional issues firmly on the agenda with lobby groups and government,’ she added.