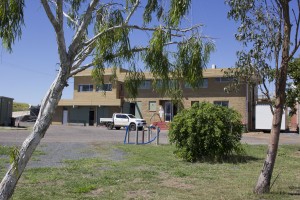 Central Highlands Regional Council was advised this week that the Blackwater Sewage Treatment Plant is required to increase its land capacity for effluent disposal to comply with the Environmental Authority conditions for the plant.

The two sites recommended are an extension to the current irrigation at the Blackwater golf course and an unused section of the Hunter Street Sports Complex.

According to the Manager Water Utilities Peter Manning large tracts of land are required for the purpose.

‘Modelling has shown that council find areas of land greater than 70 hectares for the effluent irrigation, so we identified the golf course site and the area in Hunter Street.

‘The project will be completed in two stages with the first stage being to install the irrigation systems, storage tanks and electrical works at the sewage treatment plant and Hunter Street and the final stage to extend the irrigation at the golf course.

‘The water used for irrigation is treated and safe,’ Mr Manning said.

Council awarded a tender for the project valued at $845,370 to Mackay-based NQ Water Services.